The DApps Dev Club held its fifth session, about testing smart contracts, a couple of days ago, on Tuesday evening at BitTemple.

We spent some time covering software testing in general, and capped that off with an introduction to testing vanilla Javascript using Mocha as a test runner. Subsequently, we built upon that by using truffle test to test smart contracts in Solidity.

Our videos are already up, and our video post for this session has you covered!

This session was originally scheduled to run on Tuesday 23rd April 2019, but BitTemple needed to reschedule us. We tried our best to find an alternative venue on the same date. Securing a venue for a tech meetup is extremely difficult - let alone securing one at short notice - and our efforts were in vain.

So we held our session exactly one week later on Tuesday 30th April 2019, instead. Apologies to everyone who was inconvenienced, we wish that we had more within the locus of our control. For those of you who had RSVP'ed for the original date, but were not able to make it to the rescheduled date, hopefully you're able to catch up by watching the videos!

Continuing with the bar set in the previous session, this one was almost entirely comprised of hands-on stuff, and very little theory from a slide deck.

Fun fact #1: In session #05 we broke the record for number of hands-on parts attempted - but we did not manage to get through the final one, so &hellip 🤷.

Fun fact #2: This session was also the first time there was a blunder in a live demo. As the stuff that we are dealing with gets more complex, this is probably going to happen more frequently. Frankly I'm pleasantly surprised that we have managed to get through as many sessions without one as we have - the demo gods have indeed been kind to me so far! 😇

In previous sessions, some of you have given us feedback that the pace was either too fast or too slow. We've taken that on board and experimented a little. This time for each of the hands-on parts, we included a little stretch goal, which was more or less:

That seemed to work really well, because after the session, those of you who talked to me all said that the pace was right. This is the first time that that has happened in our sessions! 🎉🎉🎉

A few of you who attend these sessions have really stepped up, going from attending the sessions, to actively helping out.

Thanks Kenneth Goh for helping out during the session, and getting people unstuck where they've gotten stuck.

Thanks Jack Ng for also helping out during the session, and getting people unstuck. Also, for reviewing my hands-on materials prior to the session, and giving me quite detailed feedback on it - which was certainly put to good use!

You deserve a shout out for being awesome! 🙌🙌 The session would not have progressed as smoothly as it did without you!

In our very first section, we ditched smart contracts, Solidity, and decentralised application development entirely, and focused purely on Javascript instead. The idea here was to lay the foundation for the next sections.

The learning objectives here were threefold:

Let's summarise each of them next.

We discussed the implementations, specifications, test runners, and the relationship between the three.

We also discussed what I'm choosing to call the implementation specification correctness quadrants: 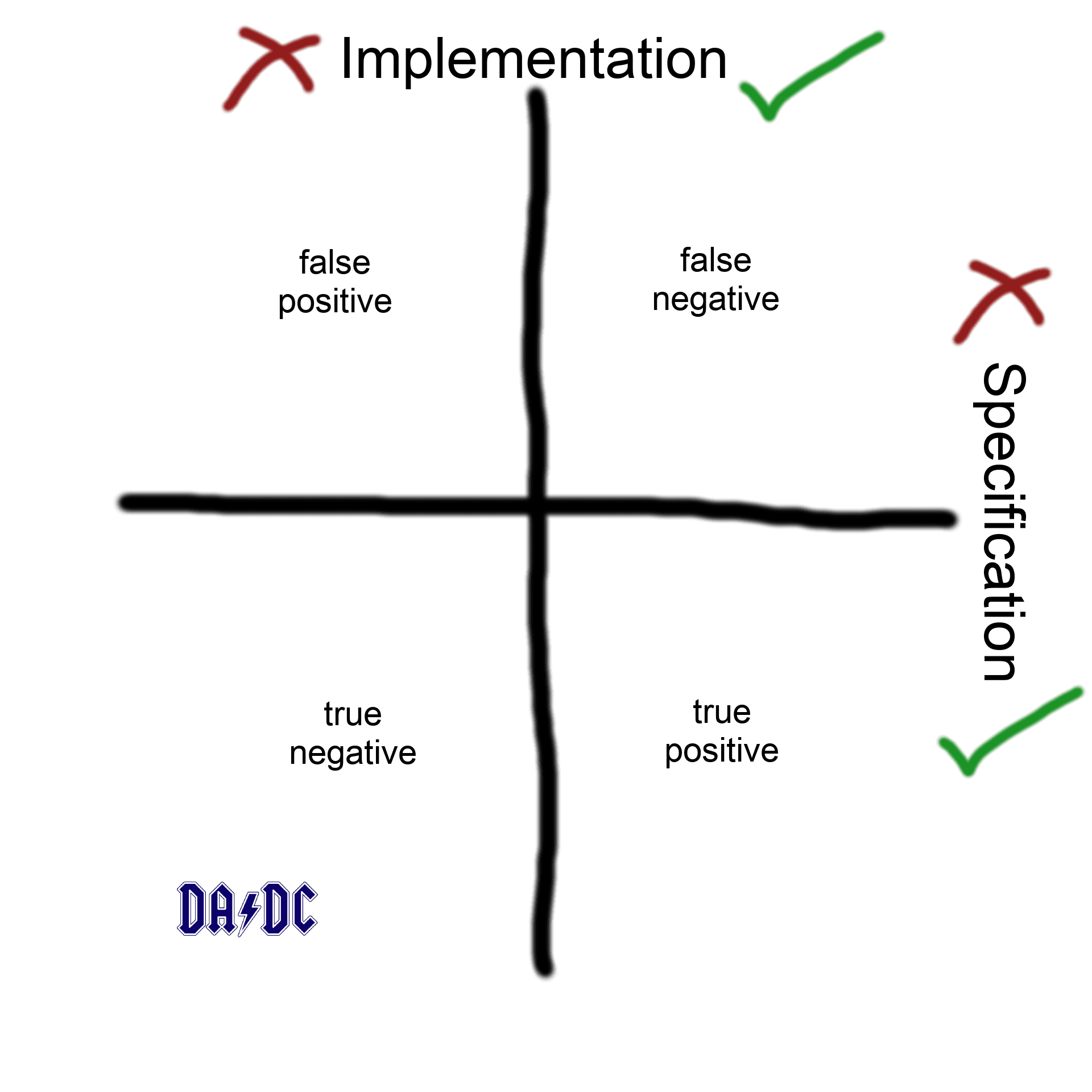 (you'll have to excuse my terrible graphic design skills - I clearly have yet to get past the mspaint.exe level of ability)

Writing tests to be run by Mocha

Here we discussed the basics like the describe and it blocks, and how to use them. We also took a look at using assert (the NodeJs core module) to write assertions within our tests.

We also did a brief detour, for those who were new to it, into using git and github for version control of your project folder.

If you have followed along with the hands-on parts during our sessions, or even in your own time, please commit, push, and add a link to your project in our chat group - it would be great to see some of the stuff that we have all built together! 🔥🔥🔥

This was more of an implicit goal rather than an implicit goal. When we asked for a show of hands for who has written Javascript before, and less than half of you present raised your hands. However, everyone was able to follow along with the hands-on parts, so gentle on-ramping of the language looks like it worked!

This section was a very brief interlude between going from using Mocha to test vanilla Javascript files, to using truffle to test Solidity smart contracts.

The focus here was mainly pointing out the 1% extra features that truffle test has that are built on top of Mocha.

When a smart contract is first deployed, it already has some initial state. This is the easiest thing for one to possibly test in a smart contract - in terms of the complexity of the tests that need to be written - so this is where we started!

Many of you, this was the first time that you have written a test for a smart contract! 👏👏👏

We began this section with a short discussion on state machines, and state transitions, int he context of smart contracts.

A Scilla smart contract (and in general most smart contracts that you see today) are stateful systems. This basically means that a smart contract at any point of time can be said to be in a particular "state". This "state" for instance can be a set of variables (and its current value) or say map (in the case of ERC20 token contract) that stores which user owns how many tokens. A state transition is a function that allows users to change the state of the contract. For instance, the transfer state transition function will allow users to transfer tokens from one user to another and hence changing the map.

We took apart the quote above, by one of the creators of Scilla, the programming language used to write smart contracts for a different network, and discussed what it means, and what the implications are for writing smart contracts in platforms such as the Ethereum Virtual Machine.

Next, we did a hands-on where we wrote tests for state transitions. There is a really interesting bit about the return values of Solidity functions which are state transitions (so go check it out).

As part of this hands-on, we also got to experiment with the clean-room environment that the contract block from truffle test.

Here we discussed how events in Solidity map to logs in Ethereum, as well as the distinction between "logs" and "structured logs".

In our hands-on we then wrote some tests for events.

We also introduce the before block from Mocha at this point.

At the beginning of this session, I said that most likely we will not get through all of the material planned for the session, because we have an audaciously large number of hands-on parts for this session. True enough, that happened.

However, we managed to get through everything but the last hands-on. So try this out for yourselves - all the material is available at the link above! If you have any questions, or get stuck, et cetera, reach out at our chat group, or we might be able to discuss it at the beginning of session #06.

Thanks to Lifelong Learning Institute (SkillsFutureSG) for sponsoring us via their learning circles program - you have them to thank for the F&B.

Thanks to BitTemple for hosting us at their excellent space. Thanks Solomon for helping us run the event, and helping with the set up.

RSVPs are now open - please let us know if you're attending, as it helps us plan for seating, ordering F&B, etc: